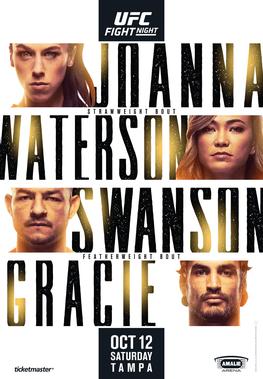 UFC Fight Night: Joanna vs. Waterson took place in Tampa Florida this weekend. It is rare that you see a fight where a fighter loses, yet their stock still rises exponentially because of the performance they put on. This did not only happen once during this card, but there were multiple occasions where something similar to this happened. Today we are going to talk about four fighters’ performances in particular, all of whom lost this weekend. Let’s start with the main event.

It was a clear cut decision for Joanna, however Waterson displayed some traits of a true champion, the fact that she lasted all five rounds with a fighter as talented as Joanna shows that she belongs in there with the best. It is even more impressive that Joanna has had previous fights at 125 and seemingly struggled to make 115 for this fight, because Waterson is undersized for the division. Every time Joanna landed the cleanest of shots, instead of not rising to the occasion and shying away, Waterson would bite down on her mouthpiece and smile. On top of that, she never once seemed like she wasn’t a game opponent. There were two occasions where she took Joanna’s back and was in good positions to finish the fight. It was even more impressive that she was doing this while being so cut up and hurt, but she is so mentally tough that she pressed Joanna in times that other fighters would have folded. She was not forgetting to implement her game plan; successfully checking kicks, as you can see by Joanna’s foot, and she never stopped throwing back until the bell rang at the end of he fifth round. The toughness that Michelle Waterson displayed in this fight is the foundation that champions are built on and this fight gave her the opportunity to get experience with a top UFC caliber fighter. Waterson is only going to learn from this and she is likely to contend for a title again before calling it quits.

The co-main event was also a stand-out fight. Kron Gracie Vs Cub Swanson was everything it was chalked up to be and more. It was clear that Cub came in with a well implemented game plan and he out-struck Kron throughout the fight. Kron displayed this same toughness that Michelle Waterson had. Swanson landed some of the most vicious body shots from a featherweight, but Kron kept pushing forward and effectively did damage. If this was a battle of heart, Kron would win every time; there were times during the fight where Cub looked frustrated and fatigued because of the pressure and resilience of his opponent. Kron is similar to TJ Dillashaw in a sense, by being so skilled on the ground, he will get exponentially better at striking because of his experience training in another martial arts discipline. Kron has a good foundation for striking and also seems to have some pop behind his punches. I’d like to see him work with someone like a Trevor Whitman, which would really take him to the next level. That and also some time spent learning some real wrestling and takedowns would make him a major threat in the featherweight division. They were promoting this guy like they knew something we didn’t know, and clearly they did, because in my opinion he surpassed my expectations.

The last two fighters that I wanted to spotlight were Luis Peña and surprisingly Mckenzie Dern. As for Luis, I think he won that fight and sometimes hometown advantage gets you in decisions, but we all know that he is one of the toughest fights in the division and his stock definitely went up. The only thing I really wanted to say about Mckenzie Dern is that she has more heart that I expected. Her opponent, Amanda Ribas, was really landing clean, powerful strikes. I don’t know if Dern’s chin just held up because of the weight class change, but I had definitely thought she wouldn’t make it to the end of the fight with all her consciousness after watching the first round. Thats not to take anything away from Ribas who put on an absolute striking clinic.

Oh, also shout out to Niko Price. When things happen once, it’s a coincidence but when it starts happening on multiple occasions, you know it might be a problem. His striking from the bottom position is impressive, he is definitely one of the fighters to watch for in 2020.