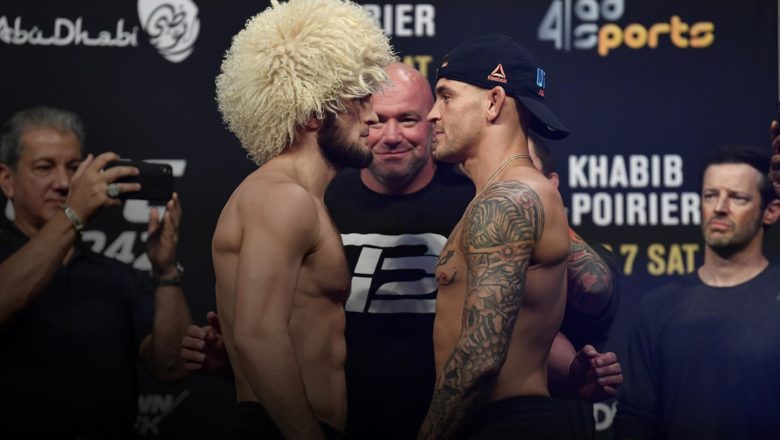 On September 7, 2019 UFC 242: Khabib vs. Poirier was held in Abu Dhabi, UAE. Many fights on this pay-per-view card were a great show for entertainment. In this post we are going to discuss the main card, as well as a controversial win in the Co-main event.

Paul Felder came into the UFC and beat everyone until he faced his first real step-up with Edson Barboza, where Felder lost to split decision the first time. In last week’s fight, Edison was winning the strikes in 2 rounds, whereas when Felder dominated strikes it was by a small differential. Barboza also had a few good takedowns, however Felder portrayed more octagon aggression, moving forward almost the whole fight. Felder won by split decision, to what seemed to take him and Edison Barboza by surprise. Many fans are not pleased with the decision either. Barboza’s team is even going to appeal the decision. Why is it so controversial?
Paul Felder is a big face in the sport. He is a UFC commentator and is popular outside of the sport. This matchup really solidified his success in the sport and will probably get him a top 5 match up in the division for his next fight. Anyone in the top 5 would most likely eat him alive, so the next fight should be a good one.

Khabib Nurmagomedov vs. Dustin Poirier
It is no secret that Khabib is nothing like we have seen before in the octagon. However if you look closely, there are holes in his game. His style works well and although most fighters can’t grapple with him, striking is obviously not his strong suit. Dustin essentially showed us the same thing that Iaquinta showed us; if you can survive Khabib’s ground attacks, get back to your feet, and start landing solid strikes, it takes Khabib out of his element completely. It seems the worst thing Khabib can encounter is someone that can come forward and successfully block takedowns as the fight progresses. Although that sounds easy in words, it has been proven to be a very hard task to complete in the cage with Khabib. One of the only people who could potentially do it is between Conor Mcgregor and Tony Ferguson. Khabib won the fight by choking out Poirier, so what’s next?. This win sets up a Mcgregor rematch. Although, even Khabib has said that it may not be the next fight, as Mcgregor must earn it first. Mcgregor hasn’t won a fight since 2016. However, he might be the one of the only ones who has a chance at finding Khabib weaknesses.

Now lets talk about Poirier. He has had a great career overall and is a very respectable figure outside the cage. It took him over 30 fights to get his first title shot, showing the grit and heart of a true fighter. Poirier hinted recently at retiring from the UFC. This may not be a bad idea for him, but not because he can’t compete but rather because he’s had a long run, made good money, and he has a life to live as well. UFC is an interesting sport, in which we have a situation where there could be a good match for Poirier in the future depending on how other fights in the sport play out. For instance, if Khabib wins his next two title defenses, regardless of the opponent, no one will really care for a Dustin vs. Khabib rematch. However, if Mcgregor manages to secure a fight with Khabib and win, there is a story behind Poirier and Mcgregor that could set up a rematch. It would also be a great striker vs striker fight, I’d even be interested in watching it if it wasn’t for a title. Although he could very likely be a top contender if he wanted to, is it worth it for Poirier to stay in the fight game?

Please be patient as we update our site for a better shopping experience. Dismiss