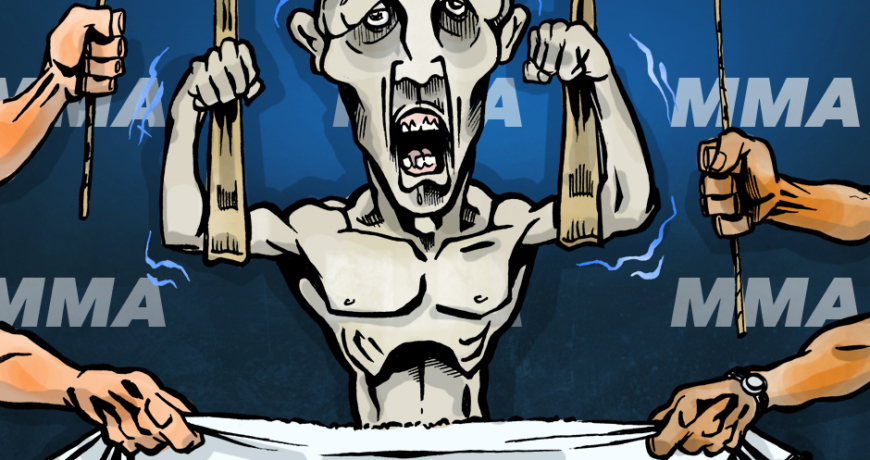 Weight cutting has always been a controversial topic when it comes to MMA. Many fighters feel that draining their body to the point of near emaciation gives them an edge on the competition as once they rehydrate after the weigh in, they will be much larger and more powerful than their opponent. Given the obvious downsides to this, such as: increased vulnerability to being knocked out, increased chance of organ failure and diminished stamina, amongst other things. In theory this strategy is flawed & doesn’t work as well as one might think. For example, if every fighter is cutting weight to that degree, isn’t everyone the same size anyways? Is there really an advantage? Most fighters are cutting upwards of 20-30 lbs of their natural body weight to achieve the weight limit of the respective weight class that they want to compete in. A fighter’s weight at weigh in is usually way less than their weight walking into the cage as the next day. Most 125ers come into the cage close to 145 lbs, most 155ers walk into the cage closer to 180 etc. This means they are rehydrating themselves and essentially gorging themselves in order to be able to gain that much weight in one day. Another interesting point is that a lot of fighter are catching onto the negative impact of weight cutting so drastically and are starting to fight more around their natural weight. Fighters like Kelvin Gastelum, Robert Whittaker, Jorge Masvedal and Tiago Santos are just some of the fighters who have opted to cut less weight and walk into the cage without being so depleted.

MMA is a young sport and is still going though a lot of different phases that are hopefully going to stabilize as the sport sticks around longer. Weight cutting will likely be one of the first things to permanently evolve and hopefully the UFC will even implement more weight class so that fighters do not feel pressured to cut so much weight. Having a weight class every 5-7 lbs instead of every 15 would be a safer alternative and would not only help fighters be healthier, but also to perform to the best of their abilities.

This videos and images show the struggles and controversy of weight cutting in the UFC including near death. and some before and after photos of some of the worst weight cuts in UFC history.

Please be patient as we update our site for a better shopping experience. Dismiss